In my days, the women in the village sang songs and celebrated happy times more than men did. These days, women can not sing or even laugh because their men will scold them or worse.

When there was a wedding or a son was born to a family in the village, the women stayed up late and had three night long village party. On the day of the wedding, the groom and bride went to their future home on horseback. The family followed them with songs of joy, dance, and drumbeat. Sometimes they brought a professional drummer and ghazal-goy. You could hear them from far and wide.

When they crossed another village, the women and girls there stopped them in their path to look at the bride’s face. The men kept walking, and the women stopped along with the bride until the girls had had an eye full.It was an innocent tradition. People of all ages sang, the young were not good at it, the older people were better – they remembered good poems, and good songs. The drummer would hang the drum from their necks and beat both sides of it in melody. The caravan walked with the beat of the drum. When the drum stopped, the people stopped. The restart of the drumbeat was the sign to move.

Hassan of Chuna was a popular ghazal-goy. He was popular at weddings and shaw-shini. Mama, Maamad were other singers from the village. They would not just attend any wedding or party. They had to be convinced, and promised rewards. The elders and the influential villagers had to go to them, and promise them good food or clothes to get them to sing. The parties began with grilled beef or lamb, sweet tea and dry fruits followed, and then came songs, stories and jokes. It continued right until sunrise.

If anyone fell asleep, the others played practical jokes on them. They placed their shoes under their noses, or tickled them in their feet, tickled their ears with a piece of string, or took items out of their pockets as a joke.

I think people knew so little about the world, their expectations were so low that they did not have much to ask for and anything worry about. People observed their religion, they did, but there was a time and place for it. People also laughed and lived.

Music was forbidden, singers were frowned upon, and the act of singing was deemed equal to bringing dishonor to the family. Even the open minded families who brought singers from far away places for their weddings and child-birth celebrations, fed and placed those singers separately, and treated them as less deserving than other guests.

As a teenager, I used to sing songs all day long when I was the family shepherd, running up and down the mountains. As did my brother, the late Aatay Khadim Hussain. Sometimes we sat together by a large rock, and sang loud songs in the mountains. And then we grew up in age, but we didn’t grow out of wanting to sing together when we could. 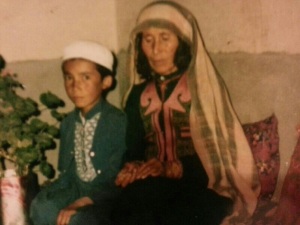 My firstborn was still a young baby when I visited my parents. The following day, as I cared for my baby in the goolkho, my brother walked in, closed the door, and pleaded with me:

Come on aaghai, let’s sing a ghazal before I take hookah and charcoal for father’s guests.

We were in a long corridor, and it was all quiet. We sat there for those brief moments, and broke out in songs, like the old days, like we sang in the mountains.

On another day, years earlier, we were carrying meal up the Akhta valley for my father and other men from the village who were there to collect firewood for the coming winter. We delivered the meal and then set off on our descent. We stopped to rest by a few large rocks. He sang, and then I sang, and then we sang together as our voices echoed in the valley below.

We sang loud, without a care in the world. As we sang, I noticed that some men resting on the rocks on the other side of the valley. The sat next to their stack of firewood, and were staring at us, listening to our songs. I alerted my brother. We were shy and we stopped singing. We picked our bag, and continued our return trip to the village.

My late brother was the child after me. We were best friends. We understood each other. May God bless his soul.