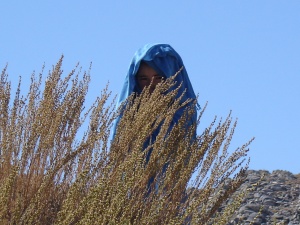 Ibrahim is the one guy who I know killed his wife. He lives in the next village over, and is related to your grandfather. He is wicked.
He beat up his wife. He beat her up so bad, her young daughters had to arrange transport to take her to Kabul for treatment. She didn’t make it. She died on the way to Kabul and the vehicle returned her lifeless body to the village.
I had met his wife. She was hard working – dokhtar-e-watan. Like the other poor women in the village, she labored hard, spent her days working the farms. She looked after his horse and cattle.

We were shocked to hear about her death. They lied to us about it. They said she had suddenly fallen ill and passed away. We still don’t know why he killed her.

The women who washed her body to prepare it for burial said the body was covered in marks and bruises, especially on her head. The hit on the head was what probably killed her. Nobody asked him questions or even tried to find out what had happened. They just took her and buried her body. That dog didn’t even attend the funeral. Then it all went quiet.
Her sister came over from Hotqol. She screamed that her sister had been beaten to death. We believed her but could not do much. His daughters cried and screamed but they didn’t say much. This continued for a few days and then everyone returned to their lives. People stopped caring and then forgot what had happened.

Ibrahim later remarried. He is still alive and lives in the village. I hear his son has taken to banditry.